I’m hoping you are willing and able to share your expertise on points I have not found clearly addressed anywhere, so far.

We’ve recently installed MSI Chilcott Treasure glass subway tiles, along with two bands of complementary mosaic tiles, to form the shower surround above a newly replaced tub. The contractor used HardieBacker board sealed with two coats of RedGard, then VersaBond thinset mortar to place the tiles. Sanded Polyblend grout was sealed 4 days after grouting and prior to first use of the shower. The completed shower enclosure initially looked quite nice! We waited, according to the grout sealer directions before using the shower for the first time. We thought we did everything right.

Within 2 weeks of beginning to use the shower we started noticing blemishes along edges of some of the subway tiles that normally have a bright, silvery, woodgrain design in them. The deteriorated locations most often have a white, milky, or cloudy appearance and there are sometimes also dark areas along edges of discolored areas.

It looks, to me, like moisture reaching the thin “pattern" layer within these tiles, starting from the edges, and is causing the discoloration/deterioration. This is, of course a strong concern: seeing visible degradation of tiles so soon after spending thousands of dollars on supplies and installation of ‘premium’ glass tile for the project.

With the basic issue described, my questions are:
1) Is it expected that moisture still penetrates through grout after applying a sealer to the grout?
* I ask this partly because, on one hand, the sealer we used is sold as a "CLEAR, PENETRATING GROUT SEALER” which enables mold, mildew, and dirt to easily rinse off “due to its MOISTURE BARRIER.” I would think a sealer that claims to create a moisture barrier should block moisture from penetrating the grout.
* On the other hand, when we had a grout contractor look at the deterioration observed in the subway tiles, he said something like: "NO sealer really prevents moisture from penetrating the grout." He would not bid on attempting any actions to prevent further tile deterioration with the belief that he would not be able to fully prevent moisture intrusion. His strong opinion was that moisture will always get into the grout and the tile, by design, should be able to withstand the presence of some moisture.

2) Is it reasonable to expect that tile advertised for use in a shower enclosure should be able to maintain its appearance, even when some moisture is present in the grout?
* The grout contractor gave opinion that we face a tile quality issue - inferior tile design or manufacturing. His opinion that tiles intended for use in a wet area should maintain their appearance and sound adhesion even when moisture is present seems valid - especially if some moisture IS expected to penetrate grout, even when sealed.
* I see blemishes developing on the edges of tiles that were not cut at all as well as on tiles that were wet-cut using a diamond blade intended for glass tiles, as recommended by the manufacturer. Blemishes have formed on the edges of tiles that are upright on the wall (such that moisture would never be standing) as well as on the slanted-but-near-horizontal tiles along the bottom of the niche, where larger amounts of moisture are likely to remain for longer periods of time.

Of course, I’m hoping your answers can help guide me regarding where things went wrong within our specific project. Whether we did something wrong, or whether the tile supplied to us was of inferior quality. I hope, as well, answers to my questions may also help others.

While I do not see a way to attach photos directly as I submit my questions to you, I am including a link to viable/downloadable PDF document on my Google Drive, in case you are willing to allow photos to provide a better understanding of the blemishes and deterioration I’m trying to describe. Here's the link to a PDF with photos:
https://drive.google.com/file/d/1gGF9ej7h_4RgP6OsxXxOY9Ui6t0slaCh/view?usp=sharing

Thanks for any insights you may be able to provide as we try to understand what happened and work to determine the best path forward!

ANSWER - Regarding whether sealing a cementitious grout makes it waterproof, it doesn't.  Using an appropriate penetrating sealer over grout will make it moisture resistant, it will make it stain resistant, and it normally will make it easier to maintain.  Sealers don't last that long depending on what conditions they are subjected to.  Normally I would expect it to be effective in a shower for 6 months more or less.  If you splash a light amount of water on the grout the water should bead up if it is working.  If it absorbs in the grout making it dark then it isn't working and needs to be resealed.

Regarding your wood grain glass tile that staining along the edge is not normal and should not be acceptable.  I'm not familiar with how this glass is produced to get that affect, but I doubt it is produced in the convention way.  Glass tiles are impervious and do not absorb.  It looks like either moisture or some other residual is migrating under the surface of the glass tile.  I see the epoxy looking coating on the back.  That is not normal.  In fact per the standards if there is an epoxy backing then you should use an epoxy adhesive to adhere it to the substrate.  Perhaps that epoxy-like material is degrading and migrating into the tile body?

The only way to determine what has caused the glass staining problem is to perform a forensic inspection and perform some laboratory testing.  That might not be practical considering the cost.  I would approach the supplier of the tile and file a claim.

One thought on “Why is my Subway Glass Tiles with Wood Grain Deteriorating?” 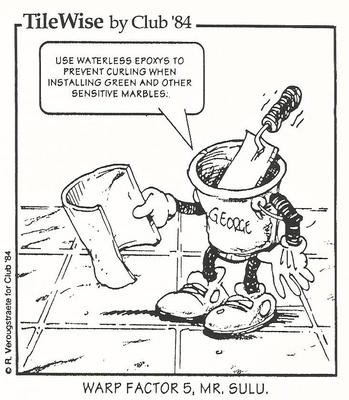