I would like to know why glaze porcelain tile's surface flatness change after some time. Example: convex become concave

How can I detect that post movement in advance?

ANSWER - I do not think it is possible for a porcelain tile to warp after it is installed.  Ceramic or Porcelain tile only warp during the kiln firing process.

Normally warpage in installed tiles is caused by the tile being subjected to moisture and that is only when it is a natural stone or a resin quartz type tile or a cementitious tile.

Porcelain tile has an absorption rate of 0.5% or less, and is technically considered impervious.  It is not known to warp when subjected to differential moisture conditions as natural stone, quartz stone or cementitous tiles are.

We have seen warpage in natural stone, quartz stone and cementitious tiles.  If the tile is bonded well enough with a rapid setting adhesive then the tiles can be restrained before they have a chance to warp.  In Europe sometimes they soak the tiles in water before installing so they are uniformly expanded from the moisture and they won't tend to warp during the installation process.

There is a moisture sensitivity test that can be performed on moisture sensitive tiles to determine if they will warp during the installation process relative to the type of adhesive that is used.  It is called the Modified British Standards (BS) EN 14617-12 Dimensional Stability Test.

If you had a true porcelain tile with an absorption rate of 0.5% or less that has warpage, then I think it was already warped when it was installed and it wasn't noticed until after it was installed. 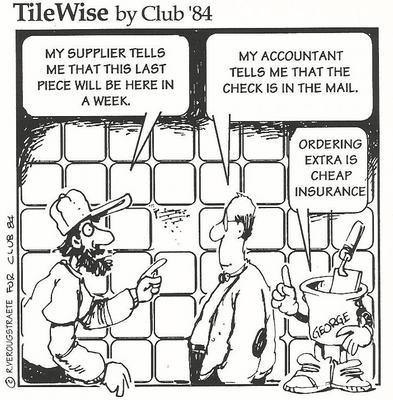 What are the Sizing Tolerance Standards for Ceramic Tiles?
November 11, 2021
Why is my Wood Looking Porcelain Tile Peeling?
February 13, 2021
How do I find a new Tile Installer to Fix or Complete…
January 23, 2021
Why is my Tile Floor Making a Cracking Sound and lifting up?
December 28, 2020
More Expert Answers