A 30 story hotel had two ceramic tile rainbow murals attached to the exterior veneer of their building. Some tiles have fallen off of the rainbow murals on the two sides of the hotel.

Investigation of Ceramic tile Exterior Veneer Rainbow Mural at Hilton Hawaiian Hotel Background: The 30 story hotel had two ceramic tile rainbow murals attached to the exterior veneer of their building.   Some tiles have fallen off of the rainbow murals on the two sides of the hotel, which are facing the ocean side and the mountain side respectively.  The murals were installed in 1968 and reportedly consist of 8,046 pieces of tile installed on each of the two sides of the building with the dimensions of 286 feet high and 26 feet wide.  It was reported that due to tiles coming loose soon after the initial installation every tile was attached to the building with a screw placed in the center of the tile.  Since then, additional tiles have fallen off predominately on the ocean facing side.  The glazed ceramic tiles were manufactured by Franciscan Tile on their extruded and pressed Terra Floor vitreous clay tile body and then painted and kiln-fired with a special glaze in collaboration with the artist Millard Sheets. Request: CTaSC was asked to investigate and inspect both murals from top to bottom to determine the cause of the tile debonding, to determine the extent of the problem, to determine if the installation met industry standards, and to determine how best to remediate the problems. 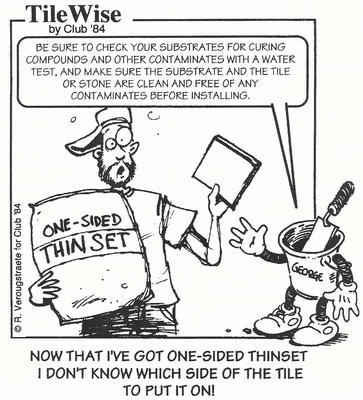 Why is Ceramic Tile Hollow and Grout Cracking on New Floor?
March 29, 2010