“Lost Roman Treasure” presented on PBS on October 8, 2002, a facinating documentary about the last minute rescue of priceless Roman Mosaic Treasures from an ancient city about to vanish beneath a reservoir, which was part of an empire that fell around A.D. 250.

Here is a sample of one of the priceless mosaics: 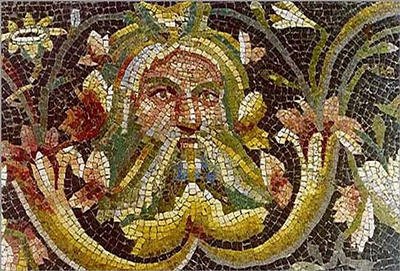 Achelous
Achelous, the horned king of Euphrates and the oldest of the male Oceanids (see Poseidon, Oceanus, and Tethys), once wrestled with Heracles, the greatest of Greek heroes, over a woman both desired for a bride. “They came together…” wrote the 5th-century B.C. Greek dramatist Sophocles in his play The Women of Trachis. “Then was there confusion of sounds — the beating of fists, the twang of bow, the clash of bull’s horns; there were the wrestling holds, the painful collision of heads, and the groans of both.” In the struggle, during which Achelous transformed himself into a bull, Heracles broke off one of Achelous’s horns (shown here on top of his forehead). But later a victorious Heracles returned the horn to him. In exchange, Achelous gave Heracles the miraculous horn of Amalthea, which provided its owner with all the food and drink he could want. This was the cornu copiae, or horn of plenty.

For a splendid viewing of twelve beautiful mosaics go to www.pbs.org/wgbh/nova/zeugma/.