I have just purchased a new home. It is our forth home on which we had a slate floor installed. The others were great, this one is a mess. We closed during Dec. 2015, and moved in the next month. Shortly thereafter we noticed some white discoloring in some areas. Also, the sealer seemed to have been applied in such quantity that it was not drying and made the floor impossible to keep clean. We tried applying a top coat non-penetrating sealer, but it did not adhere and seemed to be repelled by the original sealant. We then hired a tile and grout co. that we had used in the past to look at it and offer suggestions. We then hired them to strip and reseal the floor. After stripping, they use a penetrating sealer as did the original installer although they used a different manufacturer. Within two day we noticed white "picture framing" and white discoloration on many tiles. It has been about a week and the white areas are continuing to grow as does the number of tiles affected. There is also a white discoloration in the grout. Your suggestions are deeply appreciated.

ANSWER - Apparently there were a number of compounding deficiencies in how the slate was sealed.

So with a stone that dense, immediately after you apply the sealer to the stone you have to buff it dry with a lint free cloth.  Otherwise the sealer residue will not full dry leaving it sticky and will tend to pick up dirt and be difficult to maintain.

Natural stone should be allowed to breath, so it is never recommended to but a surface sealer on stone.   You should be using a penetrating breathable sealer.

The white condition that develops after a stone has been sealed normally indicates the stone or the underlying substrate contains moisture and after sealing the stone that moisture is trapped causing the whitish staining.   If this stone is installed over a concrete slab, then you might have moisture migrating into the slab from the outside that is the source of the moisture.  This is normally caused by the slab not having a vapor retarder that was properly installed to prevent moisture from migrating into it.   If that is the case, then you need to stop that moisture by diverting the moisture to a french drain or in some other way.

I would contact one of the companies who manufacturers strippers, sealers, and cleaners and ask for their recommendation of steps.  There is a list of manufacturers on our website resource section for Cleaners and Sealers.   I would expect that they will tell you to strip the existing sealer off the slate that should remove the whitish condition.   After the slate is clean and back in its normal natural surface, you should consider using a breathable enhancer sealer.   It will give the stone a wet look and will protect the stone.   The breathable sealer might allow the moisture to pass through avoiding the whitish staining.

2 thoughts on “Why did my slate tile turn white after applying a sealer?” 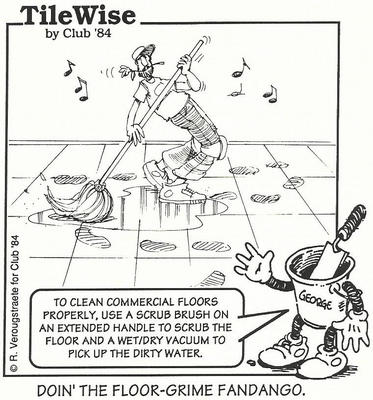