For the last couple of months I have been dealing with water droplets coming up through grout in my dining room area and leaving a white powder (efflorescence ) located at the front of the house in Florida.

I have had everybody possible out to help remedy this issue. There is no plumbing under the house anymore since I bought the house 6 years ago (we ran all new plumbing lines through the attic). The drain lines under the house have all been checked by several companies (cameras) and they are not leaking nor are any sprinkler lines leaking.

I had a drain joint fixed in the front of the house that was not installed correctly but it was not leaking so this was not the problem.

Since they had to dig to fix the joint I did see that water was sitting in the front of my house (in the hole) for probably longer than it should 2 days after rain or sprinklers. I had a engineer come out and basically they said it is from ground water coming up through the slab. This past weekend I had french drains installed around the front of the house.

My main question is how long would it take for the water to stop coming up through the grout after the french drains were installed (Its still coming up 4 days later). The dining room are all marble floors when we were trying to figure out the issue we did pull a tile to see if we could see anything. It was wet underneath. I am pulling some more tiles Thursday because I happened to have a old picture of the floors right before they put down the marble and saw a spot close to the problem area where it appeared the slab may have had a crack patched. If the French drains do not work what should I do? I would hate to rip up the marble floors (It would be very expensive) and if I did then what? We are also trying to sell the house (not because of this issue) but have removed it from the market until we remedy the issue so something needs to be done as soon as possible. Any advice would be very much appreciated.

ANSWER - Your engineer was basically saying that you have a high water table, meaning that the underground water is very close to the surface of the ground.

As the water passes through the ground, the concrete slab, and the tile setting materials it picks up minerals, which is a form of salt.  The minerals dissolve into the water and when the water reaches the top of the tile it evaporates and precipitates the minerals leaving a whitish residue and it can cause spalling (surface deterioration) in the marble surface.

You could remove the grout and install an impervious epoxy grout or an ASTM C920 sealant in the grout joints to make it water tight, but the water migration can still cause problems to the marble.  The only way to properly solve the problem is to replace the marble.  When you do clean and scarify the concrete slab and waterproof it with one of the epoxy based systems that uses a cementitious self-leveling underlayment so you can then adhere the tile to the underlayment.

6 thoughts on “What could cause water to come up through my Grout Joints?” 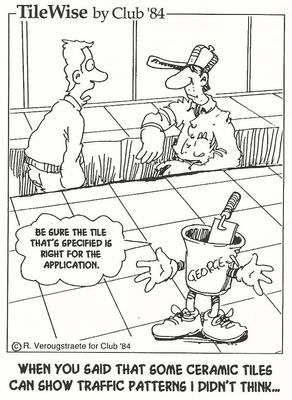