Was my granite shower installed correctly? My granite shower bench had a negative slope when installed and my builder had it taken out and replaced. However in doing so the green board that was underneath came off with the old seat. As a result they cut out and around the torn green board leaving exposed drywall edges around the seat area and simply dropped in a piece of cement board, put down mortar and replaced the granite bench.

To further complicate things, the contractor didn't want to replace the one piece of shower glass wall and cut a groove in the seat in an attempt to compensate for the new and correct slope of the seat. However, since he cut the groove once the seat was down, the saw cut a hole in the back of the shower wall, through the greenboard exposing the wood framing and drywall behind the bench wall, exposing the inside of the external wall. Then, he mortared over the hole and replaced the tile.

I am very concerned that this was NOT done correctly and to industry standards and that there will ultimately be water or humidity/vapour damage to the exposed drywall and wood framing etc.. including, overtime, mold. I am meeting with the home warranty representative in a couple of weeks and I am hoping to be able to show him that this is ALL wrong and needs to be fixed but I am having trouble finding anything in writing that supports my belief. Your expertise would be much appreciated!

ANSWER - First of all, green board is not an acceptable substrate in a wet area per the tile and stone industry standards, and per the Gypsum GA-216.   Green board is water resistant but will deteriorate and develop microbial growth (mold) when subjected to water in a shower.

Gypsum GA-216 standards says that when a gypsum board is cut that the edges have to be treated or it makes the board even more susceptible to damages from moisture.

It sounds as though they did not waterproof the shower, although it looks like the seat has a waterproof membrane on it, but I can’t tell for sure from your photos.  The cement backer board is not waterproof and should be waterproofed either under it or on top of it.  The slope to drain should be not only at the top surface of the stone, but the slope should also be at the membrane level and there should be some type of a cleavage moisture barrier that continues down into the shower floor so water has a way to evacuate.

Sounds like there are compounding deficiencies that will lead to moisture damages and limit the life of the shower.  Of course my opinion is only speculation, and the only way to substantiate my assumptions is for a professional like myself to perform an intrusive inspection.

2 thoughts on “Was my granite shower installed correctly?” 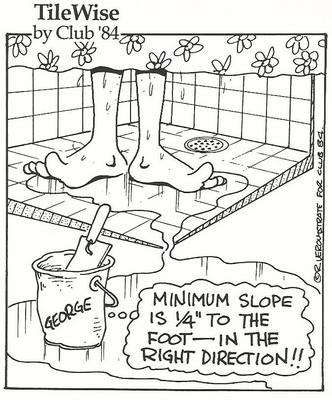