I recently purchased a house with granite counters in the kitchen. Before purchasing the house I was shown a sample of granite that looked white and had specs of black and grey in it. I signed a waiver saying the granite i receive may vary in color. My understanding of varying in color, would be a variation of the same color, like a darker shade of white, or a lighter shade of black(grey), not a completely different color.

I received a granite with a brown base with specs of red in it. I attached pictures of the original sample granite i saw prior to buying the house(white), and samples that the design center also had but I was never shown prior to my complaint(brown, matching my counters). Both of the samples are sitting on top of my actual kitchen counter and I took pictures of them. The name of the granite is Mojave Cream. I attempted to complain to the granite company but they said I signed a waiver and there was nothing they could do for me. I feel cheated and feel the sample I was shown, which was white, grey and black, was a misrepresentation of what I was actually given.

Do I have legs to stand on if I took them to court? I also have a copy of the waiver stating the granite may vary in color if you would like to see it, but as explained previously, my understanding of varying in color, was a lighter or darker shades of white and black, not a completely different color (brown,red). Otherwise they could've given me a green or blue counter and told me I was stuck because of the waiver I signed, which doesn't make any sense to me.

ANSWER - Based on the few photos you provided, I don’t think the white background sample you approved is representative of the salmon background countertop that you got.   There are standards for the stone industry of what is an acceptable sample representation.

The samples provided for approval should represent the full range of the material you will be provided.   Generally speaking most quality fabricators will have the client approve the actual slab they will fabricate their countertop from before they start the fabrication process.


Whether it is practical for you to pursue this through litigation depends?   The money you spend fighting it could cost you more than the cost to replace the countertop. 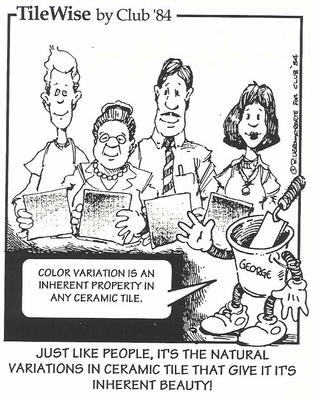