Granite too dark - We have recently had granite installed in our kitchen and it has turned into a nightmare. We chose Verde Florence at the tile supplier. They sent over 3 slabs to the fabricator.

We have a kitchen countertop (with sink) that is not quite 13' long, an L shape counter that is about five feet, and another freestanding counter that is 5 feet. We were told when the template was drawn that there would be one seam in the 13' countertop. When we arrived home the day of install there were two, one almost directly down the center. We rejected this install as we had not approved of the very visible seam and had been told when the template was drawn up that there would be only one.

We were then told that it was "impossible" to complete the counter with one seam -- but the impossible became possible when, out of frustration and a desire to have the remodeling done, we agreed to pay the installer $750 for another piece of granite.

We went to his shop on three occasions, bringing with us a small piece of the existing countertop for a color/pattern match. The first time, not only did the color not match but the template for the smaller section would not fit on the remnant of the slab from the first install. We were told to come back and view the granite outdoors to get a better perspective of the color. My husband went back the other two times. He was reassured on both occasions that the reason the color did not match was because the slab was wet and that once it dried there would not be a problem.

On the day of install we returned home again to find that there were two distinct color variations at the seam. We were told, again, that it was because the granite was wet from fabrication and that once it dried it would lighten up and there would be a better match.

One month passed, the colors had not changed and we were told, again, that the granite was still wet and that it can take months -- depending on the humidity in your home -- for the granite to dry.

Were we given "expert", honest advice and treatment? 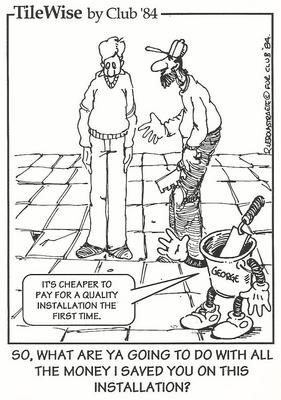