I have a project with 4" +/- thick perimeter stone veneer panels with cold-formed metal stud wall backup with 16 to 18 gauge studs spaced at 24" on center. Contractor is looking to screw 5/8" plywood to the metal studs and then have the stone anchors (4 per 2'wide x 4' high stone piece with 2 in each vertical joint) screwed to the 5/8" plywood. I am looking to see if attaching the stone in this manner is acceptable? I understand the loads involved here but am wondering if there is any code restriction on fastening the stone to the 5/8" plywood as described?

ANSWER - Plywood can be used as sheathing on an exterior wall, although it has to be protected with a grade D breathable moisture barrier.

Mechanically attaching the stone to the plywood itself is not an acceptable attachment.  Stone panels must be mechanically attached to a minimum 16 gauge metal studs or channels per the Marble Institute of America.  24" on-center steel studs need to be braced and cannot have deflection greater than l/1000 between supports per ASTM C1242.

International Building Code Chapter 14 Exterior Walls stats that steel studs are not to be spaced more than 16 inches on center.

Stone thickness alone does not tell you whether that stone is suitable for the intended use or what its capacity will be under various loads in order to determine what is the appropriate fasteners in order to be the design loads with safety factors as prescribed by the building code.  The stone needs to be tested for its physical properties and it needs to be tested with the proposed anchor assembly to verify it will perform as intended.

I would suggest you retain a structural engineer who specializes in designing stone veneer mechanical anchor systems. 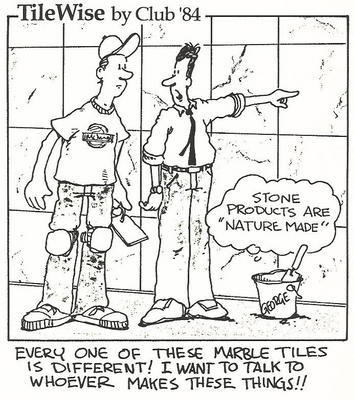