I am a homeowner living in Houston and I have recently purchased some travertine ledger stone to be used for a fireplace facade, and I have 2 questions : First, there is currently existing brick, fairly smooth, I was wondering if would you expect better results from removing this brick and building a frame and adding Hardie backer or if simply applying the stone directly to the brick would be adequate. Secondly, is it possible to fill the natural holes with some type of filler? ie. mortar, impregnated sealer, or some other method? Thank you for your time

ANSWER - If the existing brick facade is stable, then it would be better to install the travertine ledger stones over it.  It should be a more structurally stable surface to adhere to.  You will need to scarify the existing brick surface to remove any contaminates, to open up the pores of the brick, and to give a texture finish to allow for an adequate bond.

I'm assuming when you say "fill the natural holes" you are referring to the holes within the travertine surface.  It is possible to fill the holes with a cementitious grout that is often done with unfilled smooth faced travertine tiles.  Although with the texture of the split-faced travertine ledger stones it would be a problem trying to only fill the voids in the face of the stone.  It would likely be difficult and problematic to clean the stone after grouting.  If you attempt it, then you should first seal the face of the stone with a penetrating sealer so it will be easier to clean the grout off during the grouting process.

Impregnating sealers are liquids and they wouldn't fill the voids.  You could use a non-sag liquid epoxy to fill the voids, but they tend to turn yellow over time.  Generally speaking, travertine ledger stones are not grouted.


3 thoughts on “Is it better to install Travertine Stone over a Brick substrate instead of a Backer board Substrate?” 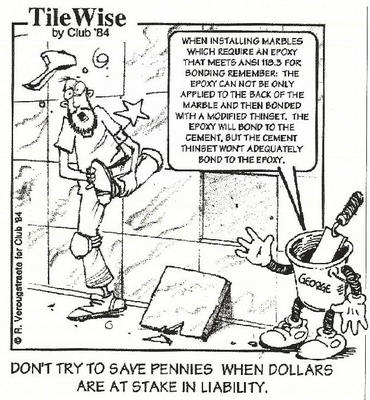