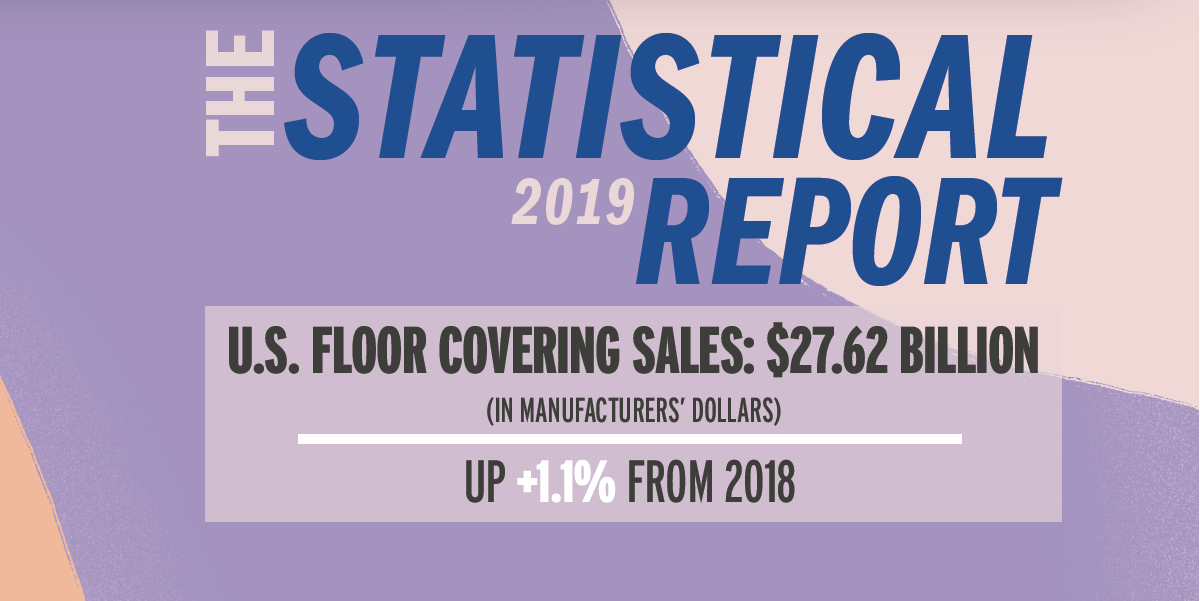 U.S. floor coverings suppliers (manufacturers and importers) saw sales flatten in 2019 due to a housing recession in the first half of the year, according to Catalina Research’s statistical report for 2019. Housing starts and existing home sales declined in the first half of 2019 due to the increase in interest rates by the Federal Reserve the previous year. At the same time, the supply chain was bloated due to a surge in imports at the end of 2018 as orders were placed to beat rising tariffs imposed on Chinese-made flooring causing channel inventories to increase. And, U.S. manufacturer sales declined and overall import shipments slowed significantly.

As a result, U.S. floor coverings manufacturer dollar sales (U.S. factory shipments minus exports plus imports) could have increased by only 1.1 percent to $27.6 billion in 2019. This is down from a 5.7 percent increase in 2018. Square foot sales could have declined by 1.8 percent to 23.5 billion as rising average selling prices dampened demand.

This is up from a 2 percent gain in the third quarter, and only a 1.2 percent gain in the first half. Retail sales received a boost from sharper gains in household and Main Street commercial floor coverings spending. The increase in household spending can be seen from the surge in home improvement construction spending in the fourth quarter of 2019. The sharp increase reflects the turnaround in existing home sales as interest rates dropped. This is important since the turnover of an existing home is a key driver of floor coverings replacement sales with a six to 12 month lag. As a result, the upturn in existing home sales, which began in early summer of 2019, led to a sharp increase in homeowner remodeling spending by the fourth quarter. The increase was also driven by continued gains in employment and personal income throughout 2019.

The recovery in floor coverings sales, however, was driven by rising demand for luxury vinyl tile (LVT). In 2019, LVT sales (WPC, SPC and hybrid products) could have increased by 29.4 percent in dollars and 25.3 percent in square feet. All other flooring products experienced flat or declining sales. Rigid core flooring drove LVT sales in 2019, while flexible products lost ground. Dollar rigid core sales could have increased by 47.6 percent in dollars in 2019, while flexible LVT sales increased only 6.3 percent. This caused rigid core flooring to reach 64 percent of total LVT sales, up from 57 percent in 2018. WPC, the original rigid core technology, continued to dominate rigid core LVT sales with a 65 percent to 70 percent share of total rigid core sales. SPC LVT, however, grew at a sharper rate. SPC features a dense core with a mineral-filled structural core made of limestone and calcium carbonate. The latest material type used is magnesium oxide. The dense core improves indentation resistance and overall wearability, making SPC suitable for high traffic residential and commercial applications.

The growing popularity of LVT and the overall improving macro environment indicated that U.S. floor coverings sales were about to take off in early 2020. In the first two months of the year, housing starts increased by 34.6 percent, existing home sales rose by nearly 10 percent and home improvement construction spending surged ahead by 18.1 percent. And then the coronavirus pandemic shut down the economy. However, green shoots are already emerging that point to a recovery in the second half of 2020.

Category Overview
Carpet & Area Rugs: Carpet and area rugs’ share of total U.S. floor coverings sales remained on a downward trend in 2019 and could have decreased by 3.4 percent in dollars and 5.1 percent in square feet in 2019, pushing sales down to $11.3 billion and 10.9 billion respectively. These trends dropped carpet and area rugs’ share of total floor coverings sales to an estimated 40.1 percent in dollars, and a 46.4 percent share in square feet. This is down from 42.9 percent and 48 percent, respectively, in 2018. In 2019, carpet and area rug sales were adversely affected by the weakness in the residential replacement market. Some 56 percent of total sector sales are made to this market.

The residential replacement market weakened as consumers continued to move away from the use of wall-to-wall carpet. The 7.8 percent decline in U.S soft surface factory production in 2019 reflects this trend since most area rugs are imported. Meanwhile, carpet and area rug square foot imports increased by 0.5 percent in 2019 as average import prices declined. Lower average import prices stimulated area rug demand.

Manufacturers are also increasing their reliance on carpet tile. Carpet tile now represents more than 60 percent of total commercial carpet sales, up from one-third of total sales a decade ago. In recent years, the leading U.S. carpet tile manufacturers have been expanding product lines and manufacturing facilities.

Ceramic tile has been able to hold onto its share of total floor coverings sales since this flooring sector can provide stone- and wood-looks at competitive prices. Ceramic tile manufacturers were able to provide these more upscale designs by investing in digital printing and other technologies.

Innovative manufacturing processes also led to the availability of larger-sized tile and large-thin porcelain panels. Panels are used for floors, walls, countertops and other interior and exterior applications. These innovations further contributed to ceramic tile’s growing popularity in residential and commercial markets.

To take advantage of sector growth, U.S.-and foreign-based manufacturers have been investing in new domestic production capacity. As a result, U.S. dollar ceramic tile shipments could have increased by 6.7 percent, and square foot shipments by 5.8 percent.

This compares to a decline in import shipments in dollars and square feet. Dollar imports turned downward due to the sharp drop in Chinese ceramic tile imports in reaction to the imposition of import injury tariffs by the U.S. Department of Commerce. This is in addition to the 25 percent 301-tariffs imposed by the Trump administration on Chinese-made products. This caused average import prices to increase, reducing their competitive edge. Imports’ share of U.S. ceramic tile sales in dollars could have declined to 56.9 percent in 2019, down from a 65.4 percent share in 2015.

Stone flooring sales, however, have not kept pace on a dollar and square foot basis due to ceramic tile’s pricing advantage. Average manufacturer stone floor tile prices could have been $4.48 in 2019. Meanwhile, ceramic tile manufacturers can offer stone-look floors for about $1.17 per square foot.

Hardwood: Wood flooring sales are estimated to have declined in dollars and square feet in 2019. This sector seems to be the most adversely affected by the surge in LVT sales as competition increases from technologically advanced rigid core products, such as WPC and SPC. Manufacturers claim these new LVT products are more water-resistant and have superior wearability than wood flooring. At the same time, average wood flooring selling prices have increased sharply over the past two years, first due to rising lumber costs then rising tariff charges.

As a result, wood flooring sales, in dollars, could have declined by 5.4 percent in 2019, while square foot sales could have dropped by 9.6 percent.

These sluggish trends caused wood flooring to lose share in the U.S. floor coverings market. In 2019, wood flooring could have accounted for 13 percent of total U.S. floor coverings dollar sales. This is down from a 14.5 percent share in 2017. On a square foot basis, wood flooring’s share could have dropped to 6.7 percent from 8 percent in 2017. These significant declines were a result of a steep decline in import shipments. In 2019, import shipments declined by 20.8 percent in dollars and 28 percent in square feet. The sharp drop in shipments from China led the decline.

And, the drop of imports from China reflects the increase in the anti-dumping tariff rates on Chinese-made engineered wood flooring by the Commerce Department and the 301-tariff imposed by the Trump administration. Rising tariffs resulted in higher import prices, which rose an average of 10.5 percent in 2019. As a result, U.S. square feet shipments could have increased by 7.4 percent. Manufacturers also introduced more water-resistant products to counter the inroads made by rigid core LVT.

As a result, resilient flooring could have accounted for 23.2 percent of total floor coverings dollar sales in 2019, and 27.2 percent of total square foot sales. This is up from 17.1 percent and 21.3 percent, respectively, in 2017. This is the sector’s highest share since the late 1990s and early 2000s. LVT’s share of total floor coverings sales rose to 17.4 percent in dollars and 16.8 percent in square feet in 2019. This is up from 10 percent and 9.5 percent, respectively, two years earlier. In 2019, LVT sales were driven by the 47.6 percent increase in rigid core LVT sales in dollars, and a 33.3 percent gain in square feet.

Foreign-sourced products have primarily satisfied the surge in U.S. resilient flooring sales. Imports’ share of total U.S. resilient flooring square foot sales could have reached 82.7 percent in 2019, up from 71.6 percent in 2017. Import penetration levels are even higher in the soaring LVT sector. Foreign-made products have made significant inroads in the LVT sector since manufacturers in China and South Korea led the development of rigid core, waterproof and click-installed LVT. Foreign-based manufacturers also led recent innovations in WPC and SPC flooring, which are currently driving demand.

In fact, Chinese manufacturers accounted for about 60 percent of total U.S. resilient flooring sales in 2019.

Chinese-made products sales declined by 28.9 percent. U.S. and European laminate flooring manufacturers made up for a portion of the decline in Chinese imports.

The full report with corresponding graphs can be found in FCW‘s digital 2019 Statistical Report issue here.